How our community made an Impact in 2018

These are difficult times, but we can overcome fear when we choose love. Here is the proof.

Congratulations on a very meaningful 2018! Meaningful because you chose to open your heart and wallet to make a contribution towards a cause you believe in! Here are few highlights of the campaigns supported by our community this year!

1: The agrarian crisis comes to Delhi: After years of apathy towards farmer suicides, citizens finally intervened. Close to 50,000 farmers marched in November this year in an extraordinary effort to bring the agrarian crisis to the power centre of Delhi. And our community raised 4 lakh rupees to host them.

But more than the funds, it was the citizen participation – both on the streets and on social media – that sent a very clear message to the political class – we’re not going to allow the agrarian crisis to stay hidden anymore.

“Several things done for the farmers march to Parliament on Nov 29 and 30 would not have been possible without your generosity and assistance. It also, simply put, helped DilliChalo.in exist and function. This is the beginning of this movement. We will continue to mobilize in support of farmers – with your help, support and assistance.” P. Sainath, senior journalist and Magsaysay award recipient.

2: The Kathua and Unnao campaign

In April 2018, we heard about the 8-year-old girl from Jammu’s nomadic Bakharwal community, who was brutally raped and killed. We also read media reports suggesting roadblocks in the delivery of justice. To channelise the outrage into something more concrete, our community decided to offer relief and financial resources to the family struggling for justice. While the campaign was on, we also heard about a similar case in Uttar Pradesh’s Unnao, where another minor rape survivor was struggling to get justice. Her father was killed for protesting against the rape accused – a BJP MLA. We raised a total of 40 lac rupees which were equally divided between the two families. These funds are now being used by both the families to fight for justice and to lead a dignified life, even though they continue to face several roadblocks still. Beyond support to the family, the campaign sent out a strong message that gender violence will not be tolerated, irrespective of the victim’s identity. 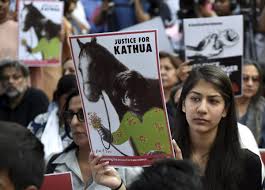 In November this year, we also managed to successfully fight a mis-information campaign by twitter trolls that tried to de-legitimise the campaign for justice. Phew! those were stressful days 🙂

3: Support for an honourable father.

Young photographer Ankit Saxena was murdered in broad daylight by the family of the girl he was in love with. The girl was from the Muslim community and within hours of the news coming out, political leaders started swarming the residence of Ankit’s parents. His grieving father Yashpal Saxena then did the extra-ordinary. He requested political leaders to avoid giving this killing a communal twist and sent them back. But they hadn’t just lost a son, they had also lost the sole breadwinner since both the parents were suffering from chronic ailments. Weeks later, the Central government refused to offer the family any relief, even Delhi’s AAP government backed out. Again, it came down to our community to step up. A few hundred citizens came together and raised more than 5 lac rupees for the family!

A few months later, Yashpal ji decided to organise an interfaith Iftaar dinner at his residence to send out a strong message of harmony and peace in these difficult times. 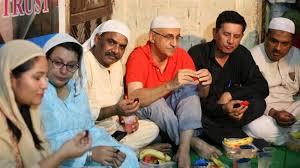 4: Campaigns against Hate: Responding to activist Kavita Krishnan’s appeal, our community raised over nine lac rupees for Chhotan Qureshi, a victim of Kasgunj violence in UP. We raised close to eight lac rupees for the family of Afrazul Khan, who was killed in Rajasthan’s Rajasmund district. This campaign was initiated by Syed Muhammad Ahmer, an executive based in Hyderabad. We have also helped raise funds for public events like India Inclusive and Baatein Aman Ki that promote social harmony and peace, initiated by activist Shabnam Hashmi among others.

In all of these cases, we sent out a clear message – When our elected representatives fail us, the citizens are capable of coming together and can look after each other.

Those who have been with us since last year know about our successful campaign for activist Jignesh Mevani. This year he has been instrumental in mainstreaming the issue of atrocities against the Dalit community and helped forge alliances with other marginalised sections. Our community had raised 19 lac rupees for his election campaign last year, including a contribution by writer Arundhati Roy. Both MLA Jignesh and Arundhati came together this year to speak out against the arrests made during the #UrbanNaxal controversy. 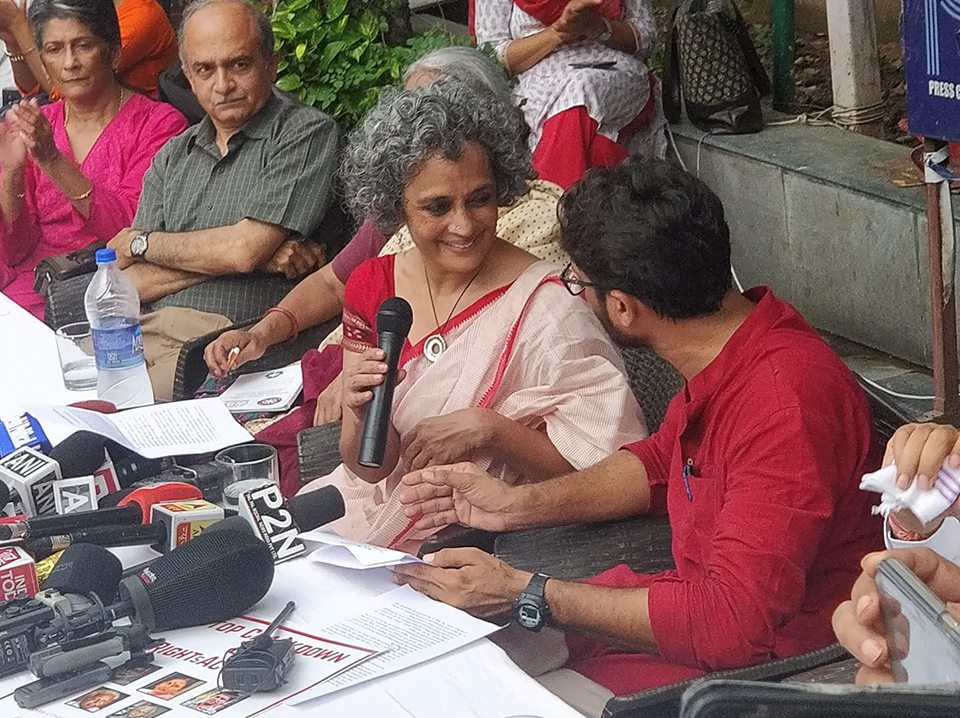 Dr Kafeel Khan, the hero of Gorakhpur who saved hundreds of children suffering from encephalitis, was made a scapegoat in a case of criminal negligence where the administration had failed. Suspended from his practice and punished for speaking out against Yogi Adityanath, Dr Khan went bankrupt. Our community raised Rs 20 lac rupees for him and he has since been running a nationwide campaign to generate awareness for Public Health crisis in India.

“Your contribution had helped me not only financially but gave me a sense that I am not alone in this fight. Your love and support has constantly motivated and driven me to fight against injustice done to me and to several families who lost their children due to government administrative failure. The CrowdNewsing campaign has encouraged me to speak out without any fear and I am now planning a nationwide campaign to expose the condition of public health in India. Without your support, I would have been lingering in jail. This picture is for all of you!” 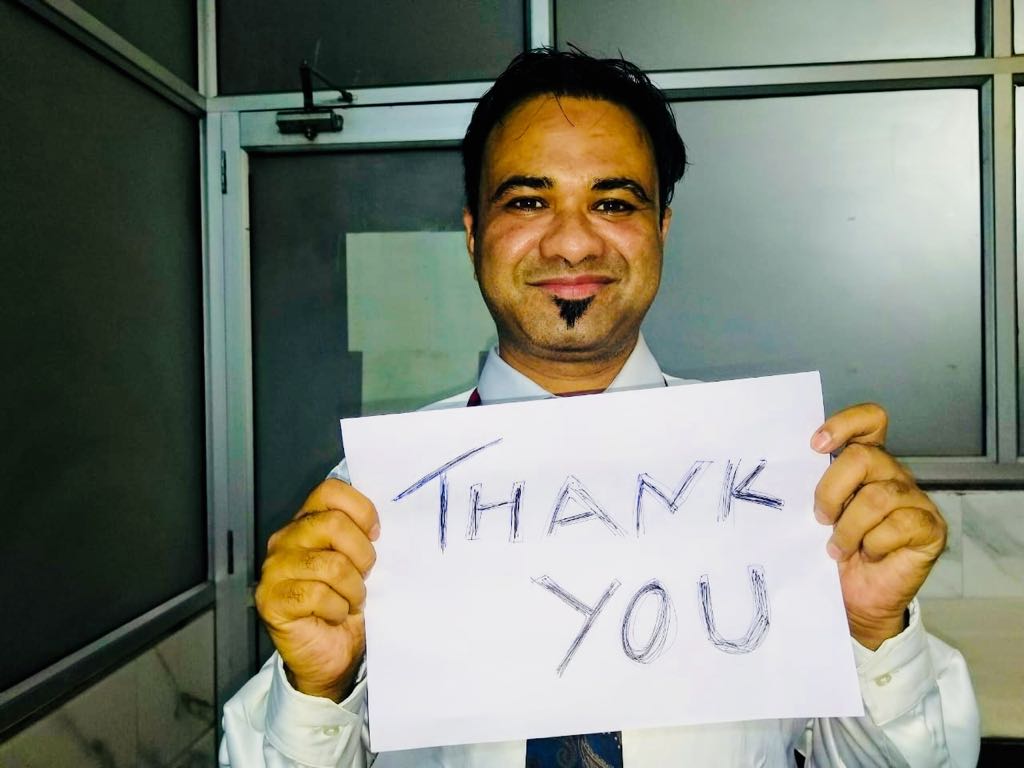 5: Our Campaigns to strengthen Media

Journalist Richa Anirudh’s primetime TV show Zindagi Live had to be discontinued to make way for ‘aggressive’ debate shows. Her show brought together stories of winners and survivors from everyday life – those who survived child abuse, alcohol abuse, those who cracked IIT against all odds. Our community helped raise 7 lac rupees for her show – Zindagi with Richa on Youtube – and it’s really picking up!

Filmmaker Nakul Singh Sawhney‘s acclaimed film Muzaffarnagar Baqi Hai is on Netflix now! Our community helped him raise close to 10 lac rupees to setup a grassroots centre under his project – Chalchitra Abhiyaan in Shamli district. They are now screening films in villages, training filmmakers to counter hate propaganda and building capacity on the ground!

Last year, Journalist Paranjoy Guha Thakurta raised close to 18 lac rupees from our community. Ever since, he has been relentlessly reporting on complex issues that expose crony capitalism in India. You can follow his work on his website.

We have also supported media organisations and startups like The Polis Project, E-Newsroom, Reporter-at-Large among others.

Activist and a prominent voice for tribal rights in India Soni Sori, advocacy group United Against Hate are among others to have received funds from our community.

So here we are. You are one of the 9000+ citizens who have contributed to more than 30 campaigns that are dedicated to the idea of strengthening our democracy. As you would have noticed, when you make a contribution to a CrowdNewsing campaign, it’s not just a donation, it’s an investment that only strengthens our democracy further. And now to ensure all of you can participate in this movement to reclaim democracy, we have built a new platform where anyone can create their own campaign and raise funds for a cause they believe in.

The new platform is called Our Democracy and you can click here to visit the new site: